I’m not ashamed to say, that through the years, many a celebrity has influenced my wardrobe.  From a very early age, possibly because I had older sisters, my mum realised that I had an opinion in what I wore, and as I reminisce of the years where I could experiment freely, with the excuse of “ahh she’s only young”.  Thankfully I have access to any photographs of ME in such styles, therefore I will show you the true trend setters of my life.

I can pinpoint the exact day it started.  The day that this happened… 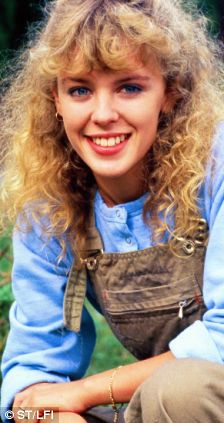 That’s right, the amazing Kylie stepped onto our tv screens as Charlene Mitchell.  Suddenly I was all dungarees and boiler suits, only allowing my australian tomboy style to be broken up by white dresses, red pillow case capes and a sword of taped together kitchen roll tubes and rolled up paper (er SHE-RA was THE most fashionable superhero and I will argue this to my grave).  I had my mum record the wedding and watched it again and again, draped in a lace cape my mum donated from her wardrobe.

The, my dream came true. She released a single.  Suddenly I was ransacking my mum and my sisters wardrobes, attempting to pull together a boobtube dress, a denim shorts and tied around the waste short, whilst begging my mum a for ra-ra skirt inspired dress so I could do “The Loccomotion” around my bedroom whenever I had the opportunity, only briefly pausing for breath to ring out “Je ne sais pas pourquoi” and to practice my swaying hips for the never to be beaten romantic classic “Especially for you”.

She was my style idol for quite some years, doing no wrong , only briefly interrupted by Jet from the Gladiators.

When I got to school it wasn’t long until Girl Power took over.  I was soon suited and booted in combat trousers, wedged flip flops, vests, and belly button piercings by day, and by night, I was all baby doll dresses, knee socks and pouts.  Wedges were my staple, whether they were trainers (Buffalo) or school shoes (Top Shop).  Skirts were rolled up ala Posh, trousers were low slung ala Mel Blatt.  I may also have decided that Mel Blatt was exactly HOW I was going to wear my baby bump when I was old enough to have one….I didn’t.

At one point the GORGEOUS Natalie Imbruglia snuck in allowing my ankles to be saved briefly in converse trainers.  I could never quite bring myself to do the tracksuit full time, but I did have it for swimming club.  You know the one I mean, the adidas one with the stripes down the side?  And the cast of Friends not only influenced my hair where I alternated “The Rachel” with The Natalie” (Imbruglia), but dungarees, cute jumpers, leather trousers, and high waisted skirts.

As we move into the next stage there is more visible evidence that other people have, of 10, 9, 8, 7 even 6 years ago.

No.  I’ve not worn a school uniform since I left school, and NO there have been no pvc catsuits and air hostess outfits in my wardrobe ever…but there have been denim shorts and cowboy boots, low slung jeans and I’m ashamed to admit it THONGAGE.  YES. That picture that everyone critisized…I wanted that body.  Oh.  And I also had a white crochet bikini to wear on holiday (Matt proposed to me then – that was SO why).  Bootcut stone washed jeans torn, cropped tops, that pink crop top and jogger combo? THAT was my gym kit. YES, even to begin with where I wore a bigger top over it to prevent people from seeing my stomach wobbling, the point was IT WAS THERE.  I still may have it and look at it wistfully a little dismayed that I’m still unable to do a backflip and just produce a substandard cartwheel. Floaty white shirts and boot cut jeans, bandeau bikinis, double denim, black lace, wavy blond locks and I Love Rock N Roll.

While this was going on I fell for the Olsen twins, Drew Barrymore and Katie Holmes.  After all, they are totes about my age. THE OLSEN TWINS ARE OK?

Around 2004-2008 was a little more tricky though.  I started working in an office, an office where if you wore anything other then a top and jeans you were questioned, there were comments, I TRIED to stay true to myself, loving Sarah Jessica Parker, the rather maturer Friends cast but sometimes, just sometimes a tutu wasn’t acceptable in the office and so I gave in and resorted to trying to stay classic – it didn’t always work, I KNOW I wore knee boots and denim skirts, I KNOW tried to get away with loubiton copy shoes, but often I’d settle for boot cut jeans, boots and a black t.shirt.  There’s nothing wrong with that, but it does make you lazy.  It continued on until this year, when I suddenly realised I’d lost my style mojo.

A lot has changed since then, I had a midlife crisis and cut off my hair.  I was bored of how I looked, I looked lazy. I felt demotivated about myself.

So I sat back and thought.  The Next catalogue was not cutting it as a style scapbook anymore (although obvs I still shop there), I looked at stars who’s style I admired.  I don’t have to live in heels, flats are not something to sneer at, and most importantly, I guess this came with age? With self confidence? (moving out of a job which sucked the life and confidence out of your body does that), as I start to realise I’m not too bad looking, that my hair looks quite cute, I can still look cool, I can still wear modern looking clothes so I now have HUGE style crushes on Michelle Williams, Kate Moss, Nicola Roberts, old school Sienna Miller and Natalie Portman, Kate Middleton, Jessica Alba, Nicole Richie, The Olsen Twins to name a few.  Simple, relaxed, but not like you haven’t cared.  I love scarves, I love denim. I love vests, and whilst I LOVE accessories, I always lean towards not going OTT. Nautical stripes, flats, parkas, big boots, long boots. I sometimes love bright colours, prints.

So tell me, who was your first style icon, and who is your current style icon.  Don’t be embarrassed, look at mine.